132
VIEWS
Share on WhatsAppShare on TwitterShare on FacebookShare on TelegramlinkedInPinterest

Salute mad professor Upsetter, the original maverick genius of the dubplate, studio reverb and rewind. One of the earliest producers of the remix record, now music industry standard.

I love what Scratch did with The Wailers, Mad Professor (Ariwa Records). I  like some of the tracks he produced for The Bestie Boys but nothing comes close to “Police and Thieves”

It was a mad tune and I fell in love with it, instantly.  That was the late 1970s in, Kensal Rise, London. The selector played “Police and Thieves” around 4 am,  some say on behalf of the landlord with the hope that dem Rub A Dub lovers would’a jus cool off and not completely rip down his wallpaper.

You coulda skank to it, do Soul Train with the wah-wah guitars or vibe to it like a Soul rebel. Scratch mixed it clean like a radio version – no outer space dubs and definitely no Ganga smoke blown over it.  The icing on the cake was Junior Mervin   – Sexy Mervin delivered catchy lyrics like vintage Curtis Mayfield. Bad bad tune.

King Sounds, Jah Shaka and dem man dem dropped it, as the morning light came through the thick black curtains. You can be sure Babylon boys in smart blue cars would come knocking.

Scratch created the revolutionary studio sounds to evoke the mood on the streets – Deceptively so because it didn’t sound like this chirpy song was about violent urban warfare on the mean streets of Kingston Jamaica. Because of Scratch’s ingenuity in sound production, particularly how to mix the sound without raising eyebrows, the song went global.

The unique thing about “Police and Thieves”  was that it appealed to a broad and varied range of listeners. It was popular at parties, christenings, drink-ups, Pubs and shabeen dancehall. Not all songs achieved that  – At some parties, people would be dancing to it completely oblivious to its true meaning. The youth in the dancehall was educated by the toasters – the guys who gave everybody the heads up by rapping over the records, Precursors to the American rappers, and originally, African griots.

The toaster would remind the youth about the stories their parents might have told them about  Enoch Powell’s “Rivers of Blood” speech or how Kelso Cochran was murdered by white racists in  1959. He lived down the road in Notting Hill Gate and was well known within Carnival circles. The late 1970s were the days of the notorious SUS laws when the Police could stop and search you “on suspicion of committing a crime – the prelude to the London riots of 1981

“Scratch pon dis ya tune der”, the toaster would say, his voice bubbling through thick dense smoke in the darkness. In response, the people would slap the walls like maniacs. To cool off things, the DJ lifts Melvin’s crispy voice;

Police and thieves in the streets (oh yeah)

Fighting the nation with their guns and ammunition

Police and thieves in the street (oh yeah)

Scaring the nation with their guns and ammunition

From genesis to revelation, yeah

The next generation will hear me

All the crimes committed day by day

No one try to stop it in any way

All the peacemakers turn war officers

Hear what I say, hey.

Every young rebel seemed to have a copy, including  Joe Strummer and his bandmates. It was of course the version by Clash on their debut album that turned the track into the predominantly white Punk anthem across the country.

You can feel Scratch in every Reggae recording. 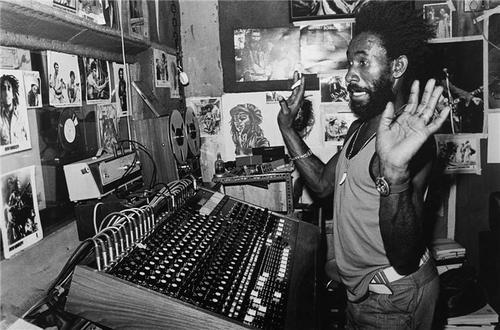