40
VIEWS
Share on WhatsAppShare on TwitterShare on FacebookShare on TelegramlinkedInPinterest

This must have been at one of the events marking Ghana’s independence in 1957. Richard Nixon in a hearty chat with Komla Gbedenmh, Ghana’s first Finance Minister. Before Nixon became US President and resigned after the Watergate scandal. 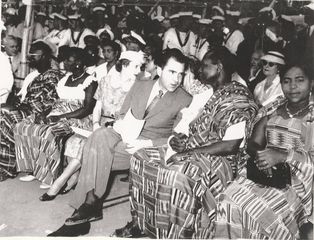 Can you guess what they were talking about?

Mrs Gbedemah (right) appears not the least interested 😏. Mrs Nixon (next to Richard ) appears to be having more fun.😊

Give us a caption

80 babies die everyday before they are a month old

Nana Kwame Ampadu – “Where are the ladies?” ❤️🇬🇭