58
VIEWS
Share on WhatsAppShare on TwitterShare on FacebookShare on TelegramlinkedInPinterest

His friends called him ‘Bugga’. Ladies called him ‘sugar’. His mother or father must have named him Minott. Bugga lost his front teeth but luckily that had no effect on his sexy soulful voice.

In London, Bugga sang for the Reggae underground, mainly Yardie guys from Jamaica. It was the late 1970s and Four Aces on Dalston Lane was a hardcore Reggae joint. Legend has it that Stevie Wonder, Bob Marley and other big stars performed there. Four Aces became a hideaway for Reggae sound systems and occasional star appearances. Three wide-eyed boys took the night bus from Kensal Rise and eventually got to Dalston Junction to check out Bugga.

We entered the dimly lit club and wondered how people moved about. Well, they rarely did. You simply found yourself a spot and “seckle’. Close to the DJ, I stood next to an old Rasta who kept sending me to the bar. After a few large tots of Cockspur Rum, he felt familiar enough to tell me about his life in Kingston, Jamaica. He was eternally grateful to Bugga because he always did the job for him when a girl visited him.

The bass drowned most of his words but I got this. Bugga was rough n ready like him but he was also a sweet-talking man – unlike him. When a girl visited him, all he had to do was play his records.  “the funny thing though is that after the girl smoke me Sensi and get de sugar from Bugga, she buggers off, innit”. I laughed but cooled off when I realised that his demeanour was changing. 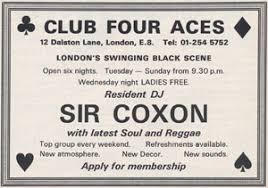 ” Sekkle, sekkle, me people”, DJ called out and introduced Bugga. He jogged to the stage and signalled to the soundman to turn up the bass. The massive homemade speakers shook up the foundations of the building. All the sexy girls moved to the front of the stage. Most were in Batty Ridders sipping Baby Champ and dancing provocatively. Their men looked on from the bar smoking Sensi and knocking back Cockspur rum.

Bugga opened the show with River Jordan, a deeply spiritual tune. He sang it like a church hymn, unlike any Reggae singer. The girls responded by ‘whining’ their waists like snakes.  Ganga men meditated on it puffing more smoke into the air. By the end of the show, I could barely see Bugga. His voice and throbbing bass, however, had completely transported the audience to another world

It was very different vibes when I saw him on the Top of the Pops TV Show. It looked as if he was entertaining at a children’s party. Yet, A Good Thing Going was the song that crossed over to the mainstream in Britain.

Bugga introduced Roots Lovers by telling the people “not to waste dis song”  Some guys rushed to the front only to be ‘bounced’ by the girls in sexy batty riders. Most of them gravitated to the back of the club where their men were waiting. My old Rasta friend said this song never failed him in London but “dem Kingston gyals too tough, man”

Bugga passed on in 2010. He was a truly hard-working artist, hugely popular in London’s Reggae underground,  japan and other places. Sadly, he never received the props he deserved in Jamaica, his  country of birth.

Flowers for those that perished