A Place Women Are Not Allowed To Give Birth

by Kwesi Owusu
in World
Reading Time: 6 mins read
0
141
VIEWS
Share on WhatsAppShare on TwitterShare on FacebookShare on TelegramlinkedInPinterest

How did I feel when I was told? Stunned into silence, I guess. The incredible story of Dove, a village in the Volta Region of Ghana where women are not allowed to give birth. Once a woman is pregnant and about to deliver, she must leave the village to give birth somewhere else.

Righteous indignation filled the silence.  Words like “cruel”, “senseless”, “discrimination”, “callous”,”wicked” agitated my mind. Strangely enough, these words lost their power when I visited the village. Experience teaches that the evilest people can also appear the kindest and most courteous. I’m also acutely aware that evil practices can be normalised over time, especially if they are ritualised through custom and religion.  I never felt I was in an evil place.

The test for making such documentaries is to ensure that it’s objective and non-judgemental. Of course, the story would be highly intriguing if indeed Dove was evil. The question to answer then would be; how has this small, sleepy village remained evil for so long?

It was great to note that throughout making the Maternal Health TV Series, no matter where people stood on matters of tradition and custom, everybody WAS agreed that the needless deaths of women from giving birth must stop.

We found it necessary to make a woman the central focus of the story. You might think that was obvious. Well, certainly not from most of the sensationalist videos on Dove posted on YouTube. Most were packed full of male experts, pontificating mainly about customary history and religion.

We were lucky to meet Dzigbordi. She was nine months pregnant and just about to leave the village because her time was due to deliver. She spoke very little and was brief in her responses as we followed and filmed her around. She was extremely solemn on the day of departure and barely said a word no matter how hard we tried to get her to express her thoughts.

It was touching to see her get on the back of the motorbike that took her to the river, where she crossed into temporary exile.

What could be the reason?

Off-camera, she told me that, according to legend, so many women died giving birth in Dove. She did not say that was the reason why the women supported such a discriminatory practice but I went away thinking.  Did it make sense as a strategy to avoid further maternal deaths in the village?

After she gave birth, we invited Dzigbordi to the studio in Accra. She came with Dove’s traditional leader who initially refused to come because he had enough of the sensationalist videos about his village. He gave his usual rundown of Dove customs and traditions but it was great to hear him say he did not object to a maternal health clinic in Dove. His only caveat was that the location had to be beyond a certain demarcation. When the matter was further interrogated, he confirmed the facility could be anywhere, if some rituals were performed. After the show, off-camera, he said there were three crucial rituals. When I asked him why three he said one may be enough. That quickly took my mind back to what Dzigbordi said. Dove had a history of high maternal deaths. If that was stopped, there would be no need to leave the village and deliver elsewhere.

A week or so after the show, the chef sent us a big thank you. He had already started discussing the construction of a maternal health clinic with the District Health Director, who was also on the show.

We were chuffed to receive the Health Advocation Award! 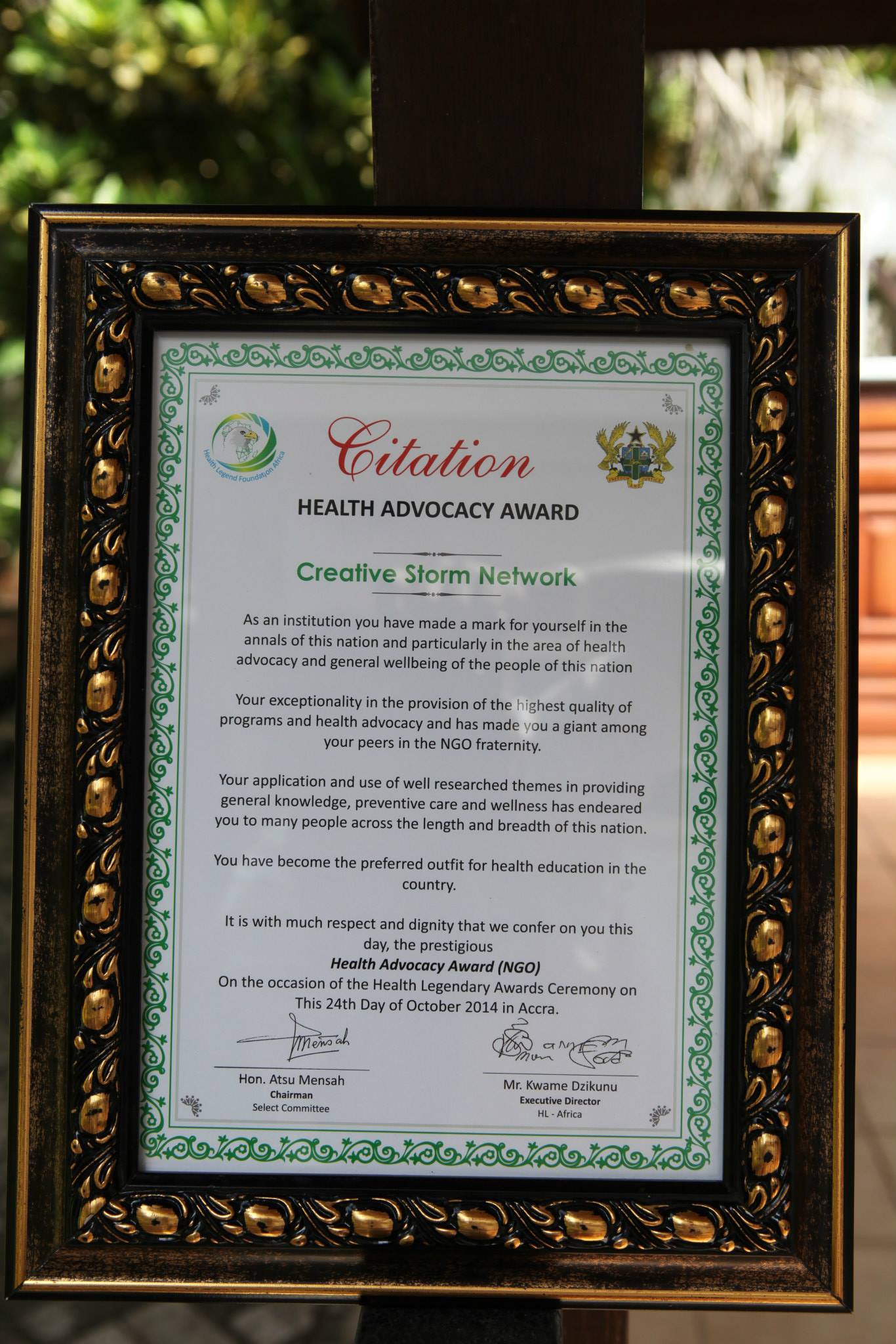