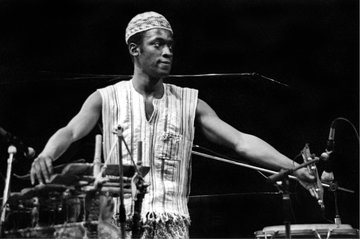 1.6k
VIEWS
Share on WhatsAppShare on TwitterShare on FacebookShare on TelegramlinkedInPinterest

Nana Tsiboe was a brilliant master drummer whose love for communal music-making probably scuppered a highly successful solo career. He was an excellent musician adept at playing a bewildering variety of African instruments.  To watch Nana Tsiboe perform was to experience the joy that comes with magical conversations within musical idioms. In his case;  enchanting Goje, Mbira, Xylophone, Atentenben, the Pennywhistle and more. He also played a wide range of drums and guitars and sang beautifully.

In spite of his enormous talent, Nana shunned the limelight and kept on the sidelines both on stage and on the music scene. He was never, it seemed in a great hurry to embrace the mainstream or “breakthrough” as the industry media hype implored. Nana was affable and a perfect gentleman. More than anything else, he lived for his music and gained a reputation for being a musician’s musician. He nurtured his craft till he could probably play a whole music concert in his sleep.

On hearing news of his passing, what made me particularly sad was to admit that his brilliant insights into music-making and its importance to culture and civilised living, expressed so joyfully, by his characteristic smile and easy-going demeanour are gone forever. I thought there must surely be another moment, no matter how fleeting to see him smile again as he picks up one of his many musical instruments. 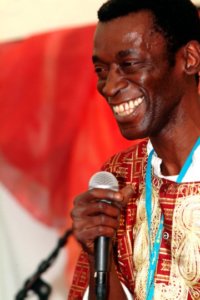 I first met Nana Tsiboe in London during the early 1980s.  A few years later, he was a member of Dade Krama music group, together with  Nii Noi Nortey, Trebi Asafoatse, Nana Danso Abiam, Nii Moi Acquye and Dada Lamptey. Dade Krama was one of a kind because it was founded for a definite creative purpose. All from Ghana and with similar musical backgrounds, they were determined to pioneer a new musical aesthetic. This was distinguished by playing only African indigenous instruments which they saw as a way of rediscovering the beauty and cultural potency of classical African music.

I co-founded African Dawn with Sheikh Gueye (Senegal) and Wanjiku Kiarie (Kenya) in 1980 and was joined by Nii Noi Nortey (Ghana), Wala Danga (Zimbabwe) and Vico Mensah. Nii Noi left to play the saxophone for Misty In Roots, the Reggae band. They toured Zimbabwe for a few years. On his return, he co-founded Dade Krama. Both groups were on a similar creative trajectory but African Dawn focussed on poetry and music.

Dade Krama and African Dawn performed regularly and held workshops at Africa Centre and St Matthews Place in Brixton. We also toured London venues such as Yaa Asantewa Centre, Sadlers Wells, Queen Elizabeth Hall, Battersea Arts Centre, Hackney Empire and others. We shared the bill with Gil Scot Heron at Brixton Academy. Those were exciting times. I came to appreciate Nana Tsiboe’s dedicated passion for music and the sheer breadth of his creative knowledge and experience. When it came to applying African drum language to both traditional and Avante Garde kinds of music, Nana was miles ahead.

Nana was also a great teacher. All the members of Dade Krama gigged with African Dawn or were featured on our self-produced albums, distributed through independents like Rough Trade, The Cartel and Stern’s Records.

The young Tunde Jegede was a key collaborator in the new musical movement. He first performed with African 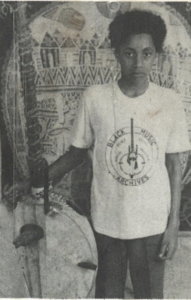 Dawn in 1981 and featured on Conversation, the second album, and Chimurenga, the third.

Dade Krama recorded Ancestral Music of Africa, their only album.  In the context of Neoclassical African music or Afro Jazz, it laid the foundation for some remarkable work by its legendary members.

Nana Danso Abiam recorded with African Dawn and returned to Ghana to form the world-famous Pan – African Orchestra. He also produced the soundtrack for my feature film, AMA. Pan African Orchestra went on to release a range of exceptional recordings exploring African neo-classical music. Their versions of Fela Kuti’s hits, some of which featured Tunde Jegede on Kora are all-time experimental classics.

Also in Accra, Nii Noi Nortey collaborated with Kofi Ghanaba, the Afro-Jazz legend and a host of musicians. He excelled in advancing his interpretations of African music on his mostly self-made instruments. He has curated one of the most fascinating musical shrines, a living testimony to his creative journey and influences.

He also toured with his own band. Trouble Dat, with Vico Mensah (Ex African Dawn) on Keyboards and Kofi Adu on drums.

Nana played regularly with a group of close musical friends. They included Kari Bannerman, Kofi Adu, Joojo Yates, and Paapa.  He is on vocals in the clip below.

Born and bred in Ghana, Nana Tsiboe performed in the US before settling in the UK. He comes from an illustrious and creative family. Reggie Tsiboe, his elder brother played the lead in Kwaw Ansah’s Love Brewed in an African Pot and performed with Bomey M, the famous hitmakers of Pop.

In the clip below Nana is characteristically barely visible on the stage. He is on the bass holding down the rhythm behind Louie Moholo on kit drums.  The exceptional deluge of cascading drums is a fitting tribute from his peers to an eventful life dedicated to musical excellence.

One of the key witnesses to the dynamic scene that produced Nana Tsiboe and the community of African musicians was photographer, Jak Kilby.

What did The Rolling Stones and Osibisa have in common? Mick Jagger Testifies